A zombie boule is a boule that dies and then returns to life and attacks the living. It is a boule that is knocked out of bounds, hits something, rebounds back onto the terrain, and then moves or deflects or stops still-living balls (boules or the jack). When that happens we are confronted by The Zombie Boule Question:

A zombie boule has interfered with the game. What should we do? 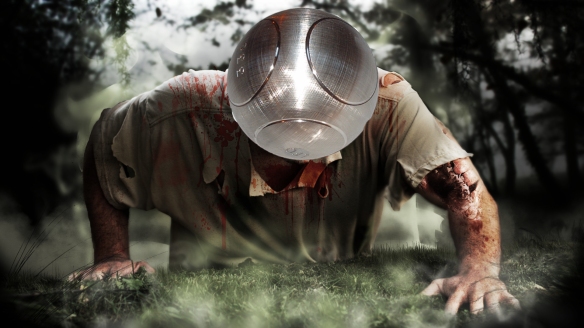 Article 19, which covers dead boules, gives us these instructions for dealing with zombies.

Any boule is dead from the moment that it enters an out-of-bounds area. … If the boule then comes back onto the game terrain, either because of the slope of the ground, or because it rebounds off of an obstacle, moving or stationary, it is immediately removed from the game and anything that it displaced after its trip through the out-of-bounds area is put back in its original location provided that those objects had been marked.   [Note that the words “provided that those objects had been marked” were added in the 2016 rules revision.]

The problem with this rule is that “putting things back in their original places” is a useless concept. In real life, the original places of balls are never marked, so under FIPJP rules it is not possible to put things back in their original places. And who knows what “original place” means for a ball that was in motion when it was stopped or deflected by a zombie? If an umpire is called in to make a decision in a Zombie Boule situation, he will always rule that the zombie boule should be removed, everything else should be left where it is, and the game should continue.

As soon as we forget the notion of “putting things back in their original places”, everything becomes easy. What might help, perhaps, is a way of thinking about zombie boules that makes it easy to see the answer to a Zombie Boule Question. Something like this.

A boule that goes out of bounds is dead. After a boule is dead, if it interacts in any way with a live ball, it is treated as part of the terrain (like a stone). As soon as possible after a boule dies, it should be moved to a location outside of, and well away from, the dead-ball line and left on the ground. [See the rules of Petanque Libre.]

Thinking about zombie boules this way won’t change the way that zombie boules should be dealt with. But it might make it easier to see the right answer in some zombie-boule situations. Like this one. 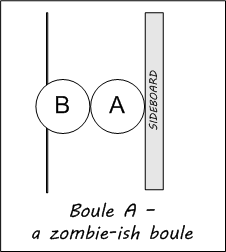 The player of boule A and his team is given a warning for not removing the dead boule.

I take it that Mike is acting on a rule interpretation in which “the terrain” includes not just the in-bounds area but also the out-of-bounds area to some unspecified distance from the dead-ball line. That’s why he has also stated (the underscores are mine) that

anything (boule, bag, etc.) on the terrain and in a position that it would stop a boule or jack from completely crossing the dead ball line should be removed. Which is why you often see umpires moving bags and the like to the other side of the timber surround.

This is why the rules of Petanque Libre specify that