updated 2021-05-25
The rules governing the thrown jack were dramatically changed in the 2020 revision of the FIPJP rules. Under the current (2020) rules, the landing strip covers the entire lane except for two small areas, 50cm deep, at each end of the lane. For more about the new rules, see THIS.
The information in this post is now obsolete. The post has been retained for any historical interest that it might have.

Article 7 specifies a number of distance-related constraints on a thrown jack. One of them is that “the jack must be a minimum of 1 meter from … the nearest boundary of an out-of-bounds area.”   This can create a problem on narrow lanes.

We are playing on a marked terrain that is 3 meters wide. Does the one-meter rule in Article 7 mean that the area where we can legally throw the jack— the “landing strip” as it were— is only one meter wide running down the middle of the terrain?

The answer to the question is “Yes, but it really depends on whether or not the terrain’s side lines are also dead-ball lines.”

Suppose that we have a playing area that contains only one marked terrain (one lane, piste, cadre), so that the boundary lines of all four sides are dead-ball lines. The lane is 4m wide and 15m long. If we measure one meter in from each of the four boundaries, then we have a landing strip in the middle of the lane that is 2m wide and 13m long. If the lane is only 3m wide, the landing strip is only one meter wide.

Things get more interesting when we have a big playing area that we divide into a grid of lanes using strings. The strings around the exterior of the grid, and the strings across the short ends of the lanes, are dead-ball lines. The other strings (the ones that cut up the playing area up into separate lanes) are “guide lines”— they indicate the boundaries of the lanes, but they aren’t dead-ball lines. 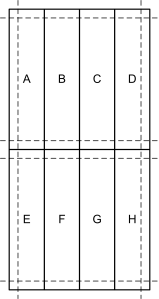 When the landing strip is too narrow

There are other situations where the landing strip is only one meter wide. Under FIPJP rules, region competitions may be played on a lane that is only 3m wide. And in time-limited games, all four boundaries of a lane are considered to be dead-ball lines. This means that in a time-limited game on a lane 3m wide— a common situation— the landing strip for each lane is only one meter wide.

This can happen even in games without time limits, if the lanes are arranged in a long strip. This kind of arrangement is quite common for competitions that are played on long, narrow areas like the paths in a public park or along a waterfront.

In order to deal with the problems of a too-narrow landing strip, many competitions reduce the jack’s required minimum distance to half a meter from a side dead-ball line. So even on a lane that is only 3m wide, the landing strip will still be at least 2m wide.

In 2016, the FIPJP adopted this practice for time-limited games— now Article 7 says— The jack must be a minimum of 1 meter from any obstacle and from the nearest edge of an out-of-bounds area. This distance is reduced to 50cm in time-limited games, except for lines at the foot of lanes.