A rule that regularly provokes questions from players occurs in Article 28.

The point is lost by a team if one of its players, while making a measurement, displaces the jack or one of the contested boules.

Much of the confusion is caused by the phrase “the point is lost…” and the sloppy way in which players, umpires, and the FIPJP rules often use the expression “to have the point” when they mean “is closer than”.   It would have been much better if the rule had been written this way.

If a player, while making a measurement, displaces the jack or one of the contested boules, then the offending team’s boule is considered to be farther from the jack than the offended team’s boule.

If the rule had been written that way, there would be far fewer questions about what the rule means and how to apply it.

Suppose that Albert (a player from Team A) is doing the measuring.  While measuring, Albert accidentally moves one of the boules or the jack.  Instantly:

Since B2 is closer to the jack than A2, Team B has the point; Team A must play the next boule.

The frozen triangle can be broken or unfrozen if later in the game the jack or one of the contested boules is moved.  But as long as none of the balls in the triangle is moved, the triangle remains frozen and the offended team’s boule is considered to be closer to the jack than the offending team’s boule.  This is true during subsequent measurements to determine which team plays next, and it is true during the agreement of points.

As soon as a player accidentally moves a ball, regardless of whether it is his or the opponent’s ball, he loses the benefit of the measure.  The point, concerning this measure, remains with the opposing team until something has moved. This is why when instructing umpires we tell them to stay on the spot until something has changed.  If he was measuring the boules closest to the jack, his team must play next.  [Mike Pegg]

The players should carefully mark each of the boules that were being contested, and the jack, in order to determine if they are subsequently moved during the round. If they remain unmoved at the end of the round, the opponents of the team who made the measuring error are declared to hold the point between the two boules that were being contested, even if their boule would no longer measure as closer.  On the other hand, if either boule or the jack is subsequently moved during play, the declaration described above is rescinded, and each boule stands on its own merit via the normal measuring procedure. [FPUSA umpire’s guide, 2015 edition] 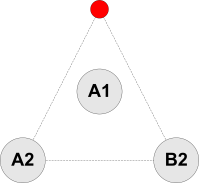 But consider a different situation. In this situation A1 is closest to the jack, so Team A has the point. Albert is measuring A2 and B2 in order to determine which boule is second-closest.  As before, Albert bumps a ball.  Instantly A2, B2 and the jack are frozen into a triangle, with B2 closer than A2. Now the boules (in order of their distance from the jack) are A1, B2, and A2.  Team A still has the point and so (unlike the previous situation) Team B plays the next boule.

As I noted earlier, much of the confusion surrounding this rule is the result of sloppy writing in the FIPJP rules, and specifically in the way that Article 28 says that “the team loses the point”. What Article 28 should say is that the team’s contested boule is considered to be farther from the jack. In our second situation, when Albert moved a contested ball, his team did NOT lose the point.  A1 is still closest to the jack, so Team A still has the point. Team B plays the next boule.