One of the problems with the FIPJP rules document is that it mixes together in one document material that properly belongs in three different documents— rules of the game, administrative procedures, and guidelines for umpires. In particular, mixing guidelines for umpires with rules of the game blurs the difference between the two. The rules about “putting things back” are a good illustration of this problem.

There are a variety of ways in which a ball (boule or jack) can be moved illegally during a game. When a ball is illegally moved, players then confront the question of whether they should leave it where it is, or put it back in its original location. 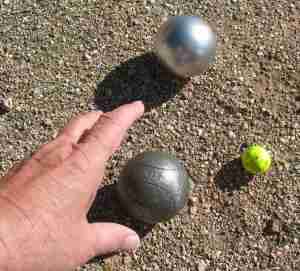 Here is what the FIPJP rules say.

Article 12 – Jack masked or displaced … To avoid all disagreement, the players must mark the position of the jack. No claim will be accepted [by an umpire] regarding unmarked boules or an unmarked jack.

Article 22 – Displaced boules … To avoid all disagreement, the players must mark the boules. No claim will be admissible [by an umpire] for an unmarked boule, and the umpire will make his decision based only on the locations of the boules on the terrain.

Guidelines for Umpires
When making a decision concerning an illegally-moved ball (boule or jack) an umpire will ignore any claim by players about the original location of the ball if that original location is not marked, and will make his decision based only on the current locations of the balls on the terrain.

These guidelines generate a lot of discussion on online petanque forums. What I want to emphasize in this post is that players are not bound by the guidelines for umpires. If you are a player in a social game where there is no umpire, the guidelines for umpires are irrelevant. You and your fellow players are free to restore an illegally-moved ball (say, a jack accidentally moved during measurement) to its original location and carry on with your game. (Here, “its original location” means in effect “a location agreeable to both teams”. This is an important feature of the rules of Petanque Libre, which are specifically designed for games where there is no umpire.)

Even if you are playing in an umpired game you are NOT required to call in an umpire if a ball is moved illegally. Without calling in an umpire, the two teams are free to restore an illegally-moved ball to its original location and carry on with their game.

Read other posts in the Putting Things Back category

2 thoughts on “Putting things back”