As of September 2018, the FIPJP rules governing the petanque jack (the little target ball, cochonnet, bouchon) are as follows. We will discuss synthetic and paramagnetic jacks later in this post.

The FIPJP specifications for jacks are contained in two documents. The first is the official FIPJP international rules for the sport of petanque. The second is Fabricants de Boules: Labels des Boules et Buts agréés en compétition. It is a list of certified manufacturers, boules, and synthetic jacks.

A short history of changes to the rules governing jacks ▲

In the 1960’s, jacks made of metal were prohibited. In 1970 the prohibition on metal jacks was replaced by a requirement that jacks be made exclusively of wood. In 2002, jacks were also permitted to be made of synthetic material (i.e. plastic, epoxy resin).

Paramagnetic jacks were prohibited (for the first time) in the 2008 version of the FIPJP rules. “Painted jacks are permitted, but must not be able to be picked up with a magnet.” Nobody really knows the reason for the prohibition.

Traditionally, jacks are made of wood— usually boxwood root (buis) or beechwood (hetre), but the rules do not require any particular type of wood. Differences in wood, when combined with differences in size, meant that a wide variation in the weight of the jack was permitted. In 2016 the weight of a jack was specified as 10-18g, which retroactively prohibited all synthetic jacks then on the market. (A jack made of beechwood weighs about 9-10g. A jack made of boxwood weighs about 14-15g. A jack made of epoxy resin weighs 22g.)

In 1996 VMS, a boutique manufacturer of petanque boules, introduced its distinctive tortue (“tortoise”) boules, designed to resemble the old wooden “nailed” boules (boules cloutées). At the same time, as a marketing gimmick, VMS brought out a new line of colorful epoxy resin jacks. The design of the resin jacks, like the design of the new boules, was meant to suggest the appearance of the old nailed boules. 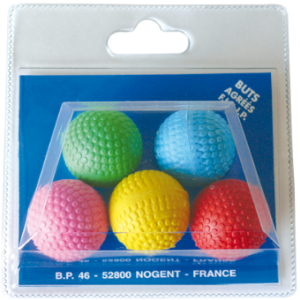 According to Mike Pegg—
These resin jacks were produced back in 1996 for the launch of the new “VMS” boule which was about the same time as the World Champs in Essen, Germany. The company gave a free resin jack with each set they sold. Soon afterwards the jacks became available to purchase and of course, as is the way with these things, the market was flooded with resin jacks. Instead of banning them the FIPJP decided to approve them … but sadly without any real investigation.

The VMS resin jacks were approved by the FIPJP in 2002. (Les buts sont en bois, ou en matiére synthétique portant le label du fabricant et ayant fait l’objet d’une homologation de la F.I.P.J.P….) As soon as people started using the synthetic jacks, they started having problems with them. The epoxy resin material is very hard (like a billiard ball or a bowling ball) and very heavy. If a synthetic jack is hit by a boule, it is going to fly farther and faster than a wooden jack, and it is going to hurt more if hits somebody. Almost immediately, many national organizations, including the FPUSA and the English Petanque Association, banned the resin jacks. As English international umpire Mike Pegg wrote—

The issue we and other nations have with the resin jack is two-fold.

There are a number of reported incidents where players have been hit on the arm causing a severe bruise. More worrying was a player hit in the face near his eye receiving a nasty cut. Our insurers advised us as we know these jacks can cause an injury we could negate our policy cover if we allowed them to be used.

For a bit more information about synthetic jacks, see THIS POST.
This might seem to be the end of the story for synthetic jacks, but it isn’t. That story has at least two more chapters. One is about “magnetic” jacks, and the other is about the weight of the jack.

The January 2013 Obut catalog listed a new product— Obut’s “black jack”. The new black jacks (buts noirs) were ramassables par aimant — could be picked up by a magnet.

At the same time the FIPJP list of approved manufacturers, boules, and jacks was updated to list the new black jack as one of the approved synthetic jacks, and the specification that “Painted jacks are permitted, but must not be able to be picked up with a magnet” was copied from the FIPJP rules of petanque to the list of approved jacks.

This caused a lot of confusion among players and umpires because the rules said that “painted jacks are permitted, but must not be able to be picked up with a magnet.” How could the FIPJP now approve a “magnetic” jack?!

Contributing to the confusion among English-speaking players was the word “magnetic”. A material is magnetic if it carries a persistent magnetic field. A material is paramagnetic if it does not carry a magnetic field itself, but is attracted by an externally applied magnetic field. Iron and steel items like nuts and bolts are paramagnetic— they aren’t magnets, but they can be picked up with magnets. An Obut black jack contains iron oxide particles embedded in the synthetic material. That means that a black jack is not magnetic but it is paramagnetic — it is not a magnet but it can be picked up by a magnet. Il n’est pas aimanté, il peut-être aimanté.

The official FIPJP position is that the rule says only that PAINTED jacks may not be paramagnetic— it says nothing about UNPAINTED jacks. So synthetic paramagnetic jacks are permitted because they are not painted. This is of course absurd, and when it was announced it was met with disapproval and ridicule. As Eli Nielsen wrote on the “Ask the Umpire” Facebook group: Do you really believe, that those who wrote the rules meant, that only painted jacks were not to be picked up with a magnet, but any other jack could legally be picked up with a magnet? What is the point? A few people noted that paramagnetic jacks might be helpful to handicapped players who use magnetic boule lifters. Several commenters opined that the approval showed that Obut, not the FIPJP, really writes the rules.

Another theory is that some players use their telescoping magnetic boule lifters as measuring devices, and the FIPJP umpires were clairvoyant— they foresaw the future development of paramagnetic jacks and were concerned that paramagnetic jacks would interfere with this practice. This is absurd. First: the FIPJP umpires aren’t clairvoyant. Second: they don’t care at all about old duffers using boule lifters as measuring devices. Third: if they were concerned about this supposed problem, they would probably revise the rules to forbid players from using magnetic boule lifters to measure, just as the rules currently forbid players from using their feet to measure.

The weight of jacks ▲

The President [of the FIPJP, Claude Azéma] first explained why the Obut jack, which could be picked up with a magnet, had been approved. In fact, the wording and effect of the relevant sentence of article 3, which says that jacks should not be capable of being picked up by a magnet, concerns only painted jacks. The Obut jack is not painted but dyed in bulk. In any case, as it only contains a few oxide particles, there is no risk of electrolysis. [The reference to a "risk of electrolysis" makes no sense. It may reflect a confused understanding of the fact that ferrites are electrically nonconductive.]

Then the discussion turned to the weight of the jack.

A number of umpires drew attention to the danger of jacks that were too heavy. The President [Azéma] also raised the problems posed by jacks that were too light, in terms both of throwing them and of their behavior, which had led the FIPJP to impose wooden jacks at the world championships. It will therefore be proposed to state in the regulations that jacks, whatever they are made of, must weigh between 10 and 18 grams, and that this restriction can be retroactive for synthetic jacks that have already been approved. That would be added to the rules of play and to the manufacturing specification.

In the past the only real stimulus for changes to the FIPJP rules has been problems that international umpires personally experienced at the world championships. The umpires had not personally experienced problems with paramagnetic jacks, but they had experienced problems with jacks that were too heavy or too light. The result? The 2016 rules revision required for the first time that jacks must have a specific weight— 10-18g. A (perhaps intended) side-effect of the new rule was that all currently-approved synthetic jacks, including Obut’s paramagnetic black jack, ended up being banned because they were too heavy!

The future of jacks ▲

It is inevitable that better synthetic jacks will be developed in the future, and that they will be certified by the FIPJP for use in competitions.

When that happens, synthetic jacks will will be cheaper, more durable, and more consistent in size and weight than wooden jacks. They will replace wooden jacks, just as metal boules replaced the old wooden nailed boules. We already have a promising candidate. Decathlon’s Geologic “recreational” jacks, although they are rather small and light (29mm diameter and 11g weight), meet the FIPJP requirements for size and weight. Decathlon could make them a bit larger, a bit heavier, and request FIPJP certification. They’d easily have the competition jack of the future. If they don’t do it, I’m sure that someone else will.

A vendor in France. Photo courtesy of Arsene Dupin of the Heart of Texas Petanque Club.

Finally, here is a curious object that I found on the Educanaute-Infos web site, in a post dated November 2013 — a jack filled with metal washers (rondelles). I have no idea who made it, or why. Perhaps some arthritic player wanted a jack that he could pick up with his magnetic boule lifter. 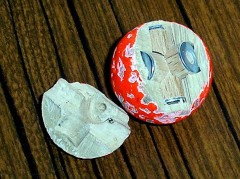