The normal practice is for the Commission to work on modifications to the rules for 12 months or more, and then to forward the revised version of the rules to the FIPJP Executive Committee for consideration at its spring meeting in April. In theory, the FIPJP Executive Committee then forwards the revised version to the national federations for comments and feedback.

Finally, the revised version is formally introduced and approved at the World Congress, which is held at the same time and place as the the World Championships (usually in September, October, or November). The FIPJP releases the rules in two languages — French (the official language) and English, and they are posted on the FIPJP’s web site.

Once the FIPJP rules are released, each national federation adopts the new international rules as their own national rules. For some nations (Spain, for instance) adopting the rules means translating the French-language version of the rules into the national language.

Often a national federation will modify the FIPJP rules before adopting them. Modifications can vary from terminology changes (to make the wording more idiomatic for a particular nation) to actual changes in rules. For example, in 2006, the FIPJP approved the use of synthetic (that is, non-wood) jacks, but the FPUSA later modified its national version of the rules to forbid synthetic jacks.

— Thanks to Mike Pegg and his Ask the Umpire Facebook page for much of this information.

When do rules changes go into effect?

These regulations, adopted by the FIPJP Executive Committee on the 4th December 2016, are applicable from the 1st January 2017.

A patch of dead ground can come between the jack and the throwing circle if the terrain has an irregular shape, so that a patch of terrain interdit intrudes into the terrain autorisé. You can see a good example in the petanque court in Urban Park, Los Alamos, New Mexico, USA.

The court is designed to fit around several pre-existing trees. On this terrain it is possible for a shot jack to fly sideways and end up around a corner, so that there is dead ground (an out-of-bounds area, terrain interdit) between it and the throwing circle.

Some umpires interpret the rules so that there is a second kind of situation in which a patch of dead ground can come between the jack and the throwing circle. We discuss that situation in our post on the Puddle Rule.

To start, there is a difference between a guide line and a dead-ball line. When a playing area is marked off into lanes (cadres, pistes) the lines (usually strings) that mark the edges of the individual lanes are called “guide lines”. Depending on the context, any particular guide line may or may not also be considered a dead-ball line.

Here are the definitions and explanations exterior, interior, and local dead-ball lines.

The diagram below shows the situation in normal (non-time-limited) games. 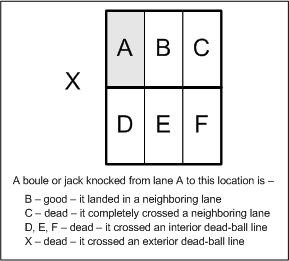 At one time, the rules actually did specify something called “THE dead-ball line”. It ran around the outside of the playing area, and could be drawn anywhere from zero to four meters from the exterior lanes.

[The] strings marking the boundaries of the different terrains are not dead-ball lines except for the lines at the foot of lanes and the lines of the exterior lanes.

The authors of the FIPJP rules haven’t yet realized that the abolition of the dead-ball line (as something different from the outer edge of the playing area) makes the whole notion of “dead-ball lines” pointless. It is now possible to express all of the rules in terms of one simple concept— the terrain autorisé. In English, we might call it the game area. The game area for any given game is the area where a boule can travel and still be a part of the game, still alive.

We could still use the expression “dead-ball line” if we found it handy. It would simply mean the edge or boundary of the game area.

I find it helpful to think of the FIPJP rules as a mixture of rules for two different games, which have quite different conceptual structures.

Traditional Petanque is played on an open, unmarked terrain (terrain libre). The fundamental rules of the game are expressed in terms of distances from the only fixed point on the terrain, the circle.

Competition Petanque is played on a terrain that has marked boundary lines (un terrain délimité or terrain tracé). Most FIPJP rules assume that the game is being played in a competition, on a playing area that is divided (as in this diagram) into a grid of lanes (cadres).

In English, the lines in the grid (traditionally, strings strung tightly between nails driven into the ground) are called “guide-lines”. In French they are simply called “strings” (ficelles) or “lines” (lignes).

Each game is assigned to be played on one of the lanes, and that lane then becomes the “assigned lane” (cadre affecté or cadre attribué) for the game. 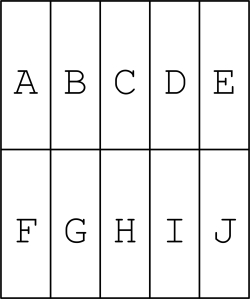 The game’s in-bounds area (terrain autorisé) may or may not be the same as its assigned lane.

For time-limited games, the game’s in-bounds area is its assigned lane.

Regardless of the size or shape of a game’s in-bounds area, the circle must always be placed, and the jack must always be thrown, within the guide-lines of the game’s assigned lane.

In contrast to Traditional Petanque, then, the fundamental rules for Competition Petanque are NOT expressed in terms of distance. The fundamental rules of Competition Petanque are expressed in terms of lines and areas — guide-lines and dead-ball lines, the assigned lane and in-bounds areas (terrain autorisé) and out-of-bounds areas (terrain interdit).